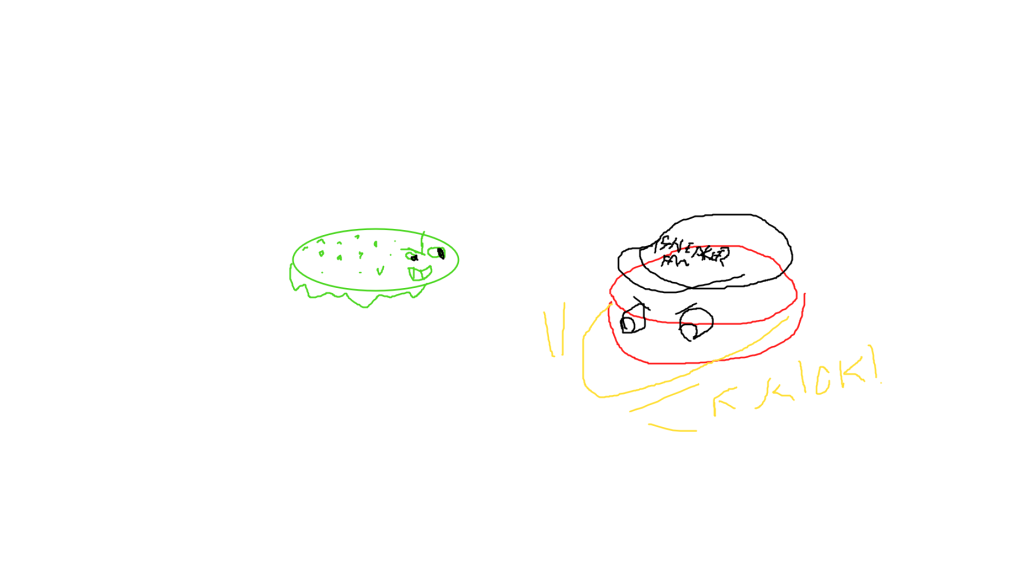 A clam kicked the mammoth. It was named Bruce the evil clam! Bruce the kicker was going to kick the world with his little foot. Bruce is a sneaker fan, unfortunately his foot couldn’t fit in any sneaker. Bruce decided to design his own sneaker! A sea cucumber came along just to see what was going on. She told Bruce the mammoth was incredibly upset because of the kick. The sea cucumber was going to help Bruce, but she also wanted a free pair of sneakers for her species. Bruce knew that this would make him rich “Yes!” he said, unaware of her evil plan.

The evil sea cucumber and Bruce began drawing designs of beautiful sneakers. Little did Bruce know she was working as a double agent spy. Bob the evil starfish hired her to steal sneaker designs. He needed money for pizza with the mammoth’s appetite being so incredibly extremely large. Bruce became suspicious when sneakers started appearing in the Starfish Bob shop and a kebob stand. He stormed into Bob’s stinky shop and screamed “THEIF!” Everybody froze terrified. “Bob is evil!?!?!?!?!?!?!?!?!?!?!?!?!?!?!?!?!?!?” asked sea cucumber. “Yes he’s CHHHHHEEEESSSEEEEE!”

“YES HE’S EVIL!” Bruce whispered. Turning around in anger, the sea cucumber jumped in delight. She thought she had the key to find TEA under the sea. The tea that was called tea. It turned cucumbers softer and softer. It was deadly! The sea cucumber turned into a slimey pile of snot and cheese. Mammoth ate it and had a great big poo!

We use more exclamation marks than Stafy’s adventure!

I made a mason jar cozy to keep my paint brushes in. I love the texture it adds to the art shelf!
New year, new skill! Learn to crochet with me on #Outschool for FREE! #OutschoolCoupon
Gift wrap crochet
In 2017 I started online teaching with mostly #homeschooled learners. They were so excited to #socialize that I began running groups strictly for the purpose of hanging out. In the four years since, I’ve received many emails from worried parents telling me about their lonely kids. I’ve seen young people vulnerably step into #online spaces. I’ve felt meaningful connections in #zoom meetings and I’ve seen countless #friendships form.  I’ve been sent pictures of #friends from different countries who made trips to see each other after meeting in my group.
Organized my creative space with some crocheted containers. I really like seeing my supplies out and ready to go. What should I make next? Would these be a good workshop for me to host?
On my fav mountain with the lily loving hummingbirds. Super hard to spot them in the photos but so magical to see. Thanks for the attire @mossgreymossgrey and the earrings @forest.and.fog 🌲 My necklace was my own @vieada creation and features a little whistle for the bears. 🐻 #LocalMakersRock #SupportSmallBusiness